Season of the Villain is Studio Korppikela’s non-profit web series with length of seven episodes. The story tells, through satire and the means of the super hero genre, of a world without heroes, through the eyes of the super criminals themselves. In a world, where super heroes are part of the everyday life, the villains simply represent the necessary evil, for without the evil from which true heroism could arise, there wouldn’t be any good, either. The symbolic picture of a hero, flying towards the sunset with their loved one, and of the inevitably defeated villain, has made a home for itself in the minds of the people for so long, that it’s taken for granted, diminishing even the need for a grand battle before the seemingly obvious outcome.

But unearned appreciation is poisonous, causing such inflation in true heroism, from which it cannot rise on its own. After the super heroism degenerated from concrete actions to idle “celebrityness”, estranged from the real people, an interesting phenomenon has taken place on the other side of the pool as well. In its own peculiar trait, which super criminality represents, there has always been some sort of a counterforce – some obstacle, which has in its hindrance provided the sufficient willfulness and fuel to set aflame even the most desperate of plans, doomed ever since the beginning. The only virtue in a “Golden Age” villain is his or her insistence, never backing down, even in the face of an impossibly superior opponent – but if the villain has no one left to fight, does even the bad guy have place in this world anymore? Or could it be, that there’s a completely new role to fill in?

Season of the Villain tells of a literal midseason, following the Golden Age of the heroes, but already staring into the face of the pitted, cynical future. But surprisingly, after the extinction of vigilantes, it turns out that the villains have not flourished. In fact, for many of them the situation causes – in a megalomaniacal scale, of course – anxiousness of their own identity. The sense of unbelonging has the villains fixating their resources into more trivial matters, like competing amongst themselves. Super criminals being, by nature, such a narcissistic lot, that even a petty competition may turn into something larger than life – and, for the outside spectator, into something absolutely hysterical.

Once the last true conqueror, Lord of Darkness and old school super criminal is caught by the authorities, a completely new page is turned in the apathy pestered underworld. Due the arrest and the recently vacant title of being the Interpol’s most wanted criminal, four professional criminals are stirred back to action, finding their purpose again, while the fifth – a freshly unemployed minion – finds herself losing her own.

The episodes were released between 2012-13. The filming took place between July and October 2012. The project received financial support through the Oulu City youth council ONE’s (Oulun Nuorten Edustajisto) Nero-campaign. In terms of locations and filming equipment, collaboration was made in addition to the Oulu City with numerous local firms and establishments. We would like to thank you for your help: Pilailupuoti, Radisson Blu Hotel, Oluthuone Parkkinen, the Oulu University’s Zoological Museum, Hotel-restaurant Lasaretti and the Oulu City Library.

No Honour Among Thieves (5)

Studio Korppikela’s newest web series launched in December 2013, a comic book world inspired web series in association with ONE (Oulun Nuorten Edustajisto), Once Upon A Crime – The Web Series. You can follow the superhero satire’s progress in real time from our Facebook page.

In a world of mighty superheroes and cunning villains, a son of an inventor has to return to the past to prevent the death of his mad scientist mother. Thus, altering the time line into the worst possible alternative: the regular world without heroes or villains.

In Episode 0 “Mama Tried To Raise Me Better” economic recession forces two former supervillains, The Jogger and Agent Orange, to try their hand with the basics of the industry.

In “Pilot” the cat burglar Lucifera meets up with the bookmaker of the “End of the World Betting Office”. Both have more to say than are willing to share. Meanwhile Doctor Cynic makes an astonishing discovery in his mother’s abandoned hiding place.

Episode 2 “The Wonder Years Are Over” After failing to relaunch his supercriminal career, the Jogger is forced to take drastic measures. A Russian criminal mastermind sets out to rescue V. Putin from a high-end celebrity rehab. There she meets a former minion, who still craves back to the old days. Meanwhile Doctor Cynic explores an invention which might change the course of history… permanently.

Episode 3 “Doctor Cynic, I Presume?” Doctor Cynic’s first trip trough time leads him (and his very out spoken Guilty Conscience) in the middle of mortal danger. In this episode we discover why doctor always wears his mask and witness what sort of mayhem ensues when two supervillains meet.

Episode 4 “Trouble in the Oval Office” Doctor Cynic’s second trip through time takes him and his high-pitched Guilty Conscience back to the present. But something seems off. Altering the past has changed the course of history. His mother is alive, supervillans and heroes now only exist in the pages of comic books. Who is the president of the United States? And is Doctor Cynic… married?

Episode 5 “Heroes & Villains”
After restoring the past back in order Doctor Cynic’s time machine suddenly leaves him in year 2010 – the last good years of supervillainy. A major heist takes place in Paris and two supervillains run into a pair of local caped crusaders: Golden Frog and the Mime.

Find out the shocking truth about the world of supervillainy! Straight from the year 2012!
An entirely improvised episode. 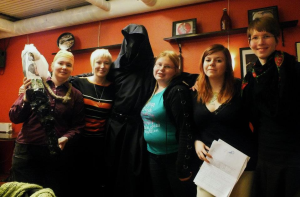